Note from Dave: Mark Lightell is actually a frequent commenter at the LMHR Facebook group, but he is notably an advocate for reduction of LDL cholesterol and ApoB, and a firm believer in the Lipid Heart Hypothesis. However, he’s also interested in our work and saw a clear opportunity to make a contribution with this experiment. I think you’ll find this guest post on his experiment very interesting. Also, see Nick’s companion analysis for this experiment, and our added note at the end.

The LMHR phenotype paper by Nick Norwitz, Dave Feldman, and colleagues suggests that LMHRs, rather than being a genetic anomaly, may be a reproducible metabolic phenomenon.  If this is true, it should be possible to recreate this LMHR lipid profile in most people who are metabolically healthy (low TG/HDL ratio) and lean, and in whom dietary energy is derived primarily from fat with minimal carbohydrate intake. Due to LDL particles having a half-life of 3 days, I further expect the LMHR phenotype could be seen over the course of 2 weeks.

In people who are lean, metabolically healthy (exhibiting a low TG/HDL-C ratio), and with lower BMI, adherence to a very low carb ketogenic diet will produce a LMHR lipid profile within a timespan of 2 weeks.

I fit these criteria, with the added benefit of having a high energy demand due to my daily exercise (50+ miles of running per week).  According to the Lipid Energy Model, proposed to mechanistically explain the phenotype, this should amplify the effect due to my body requiring a greater volume of lipoproteins (LDL) to traffic triglycerides for energy.  I’ve never done a low carb diet, but given that I should be the ideal candidate for this effect, I decided to give it my best shot.

In case you’re pressed for time, here’s the summary: 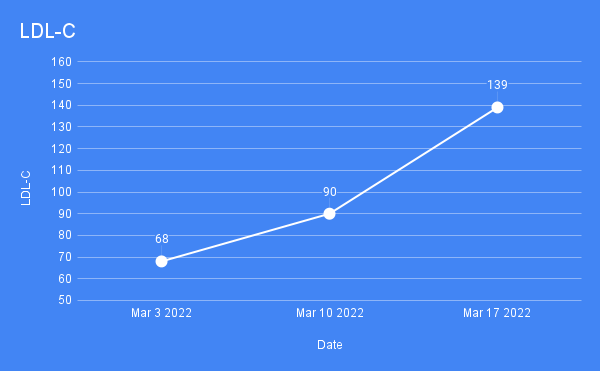 Over the two week experiment my LDL-C increased over 2-fold, albeit not quite to the LMHR LDL-C threshold of 200.  Specifically, my LDL-C increased from 68 to 139, which suggests to me that it is very much possible to induce the LMHR metabolic phenomenon, but that 2 weeks is not a sufficient time frame. I suspect 3-4 weeks would have shown LDL-C of 200 or more. 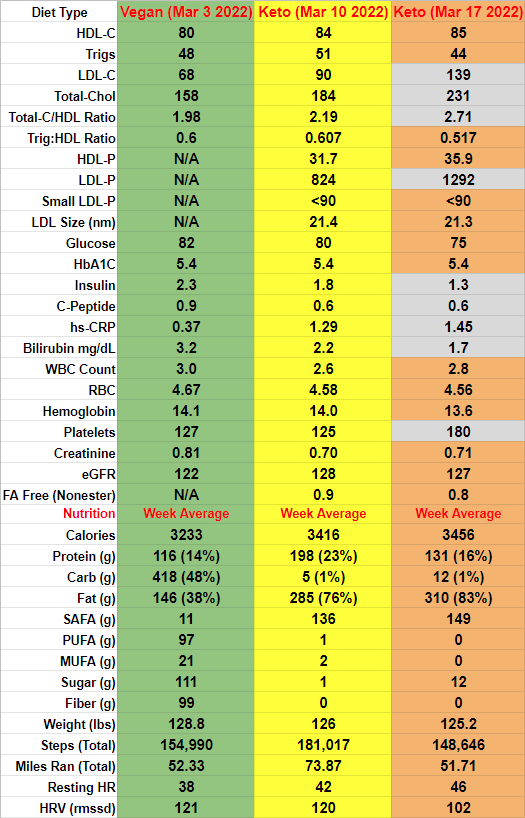 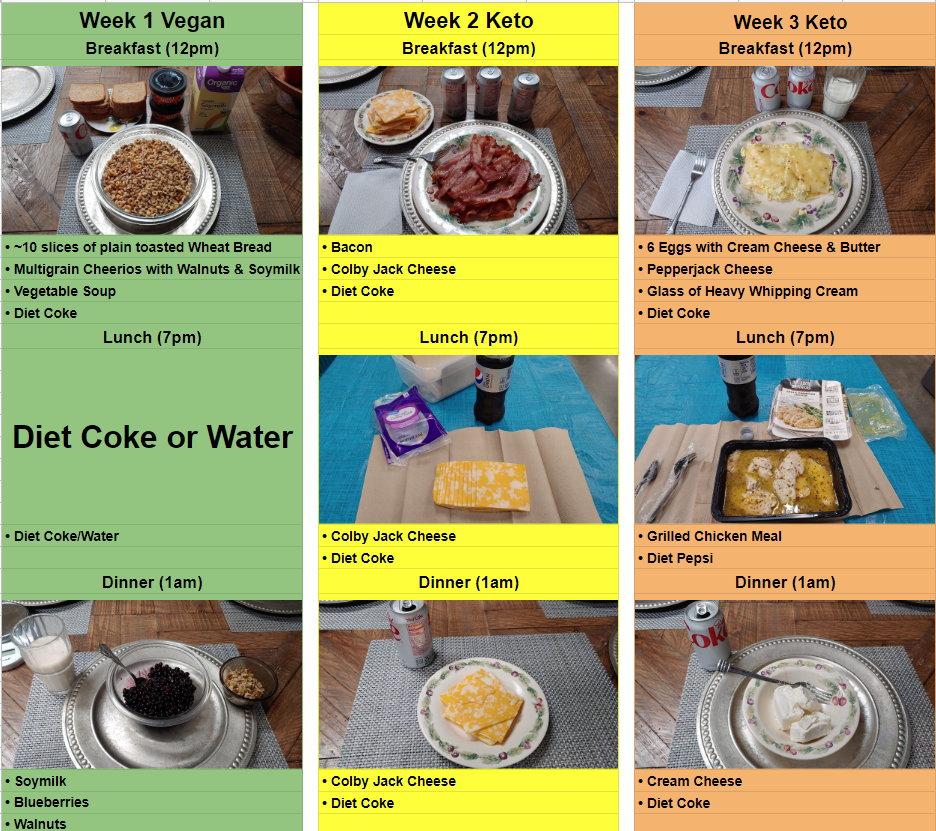 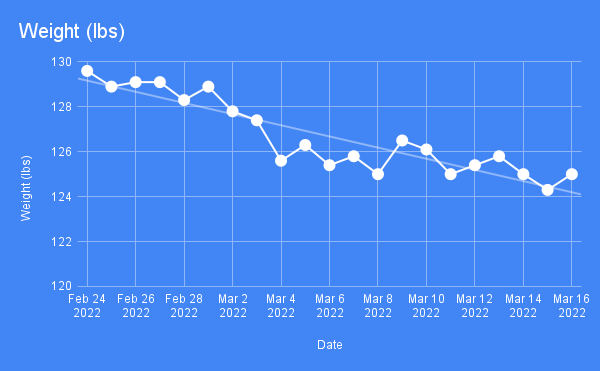 I wanted to begin the experiment by establishing a low baseline LDL-C. After the conclusion of my December 2021 Vegetarian experiment (where I brought LDL-C down to 64) I was enjoying the freedom of “no diet,” eating frequently at restaurants.  I’ve always been weight stable so it wasn’t that I had gained weight, but rather that it was extremely likely my LDL-C was far above the 64 I got in December.

So starting February 5, 2022 I began the work to reduce my LDL-C.  I went back to my proven Vegetarian diet, but was tempted with ideas to achieve an even lower LDL-C than last time, so I changed it to a Vegan diet.  I removed animal products, got dietary cholesterol down to 0mg, reduced saturated fat as much as possible, while maximizing PUFA intake via walnuts, and increasing fiber.

I found this diet easily tolerable and enjoyable, even if fairly restrictive and mundane.  I ended up running 52 miles this week, with total carbs averaging 418g/day.

Pft, 68??  Where’s my 50?  I found this result disappointing, as I really thought my “improvements” would beat my last result of 64 from December 2021 to give me my lowest LDL-C yet. From this result I’ve concluded that the PUFA-to-saturated fat ratio is not as powerful as I thought for reducing LDL-C.  While LDL-C did not behave as I predicted, it was not the goal of this experiment (just an “along the way” project).

It was time for the Keto/Carnivore arm of the experiment.

The switch to bacon had a promising start but eventually became difficult to tolerate, which is to be expected after consuming 12 packs of bacon in 5 days.  I managed to stick with it until the first Keto lab draw.  I ended up running 74 miles this week, with total carbs averaging 5g/day.

Not quite what I expected.  I was hopeful for something in the 130s range, so I found this a bit disappointing.

At this point I was quite sick of bacon and Colby Jack cheese, so I adopted a slightly more flexible Keto/Carnivore diet while maintaining the supreme directive of minimal carbohydrates.

I ended up running 52 miles this week, with total carbs averaging 12g/day.

Better, but at the start of this I fully believed it was going to be a slam dunk of an experiment with LDL 200+.  Instead, what I feared most ended up happening: A middling result that effectively demands a longer experiment.  What would have happened in just one more week?  I was this close to finding out, but wow was this diet difficult and absolutely unenjoyable.  Maximal carb elimination made the diet so restrictive to the point that I could not continue it past 2 weeks.  I had so much drive and motivation at the start, but that was largely sapped from me on this diet.  Food became a chore that gave me no enjoyment, I was not hungry most of the time, and generally did not feel great.  It was made worse by the fact that, given my activity levels, I needed to consume ~3400+ calories per day of food that I did not care for just to maintain my weight.

All that to say: Yes I had a miserable time, and yes I fell short of my goal to create LMHR lipids at will, but I’m still glad I did it.  Now hopefully someone else can take the torch and try for 3-4 weeks to see what would have happened.

Why did you do this experiment in the first place?

I find lipids and biomarkers pretty fascinating.  Especially the nature of LDL and its function in the body.  I know it’s a controversial topic, so to clarify my position I will say that I’m convinced of LDL/apoB being causal in cardiovascular disease.  My main interest is the quantification of that risk.

If LDL/apoB is the only risk factor, what is the risk for someone like me? An athlete with high HDL, low triglycerides, and low body fat, but on an “anything goes” diet of restaurant food my LDL-C will rest at around ~130.  How much risk do I have between 68 and 130?  I don’t think anyone has an answer to that, other than the basic binary answer of “yes it’s more atherogenic”.  I think it matters if we’re talking months to a year vs years to a decade+ in life expectancy.  Some people may be willing to make that trade of not having to limit their food choices for a lifetime if the cost is “minimal” with regard to elevated LDL/apoB.

That’s why I find Dave Feldman’s research into this topic interesting, because he is essentially exploring a niche where increases in LDL may not be a pathological response, but rather a benign adaptive one.  While I would like for that to be the case, I’m also aware that the preponderance of evidence we currently have is stacked against that idea, but that doesn’t mean it’s not an idea worth exploring.  If it did end up being true, it would be a fascinating discovery if only because literally, “how does that work?”.  And for those of us in good health with high HDL and low triglycerides, where elevated LDL/apoB is our only risk factor, we would no longer have to limit food choices to keep this marker within range.

In summary, I think there is something interesting happening here with this massive increase in LDL, and this was my attempt at adding my piece to the puzzle. 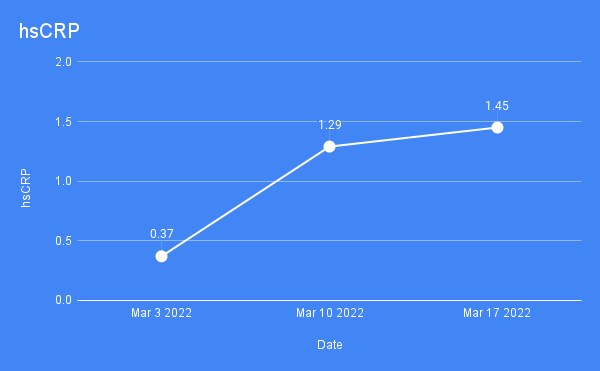 hsCRP – Increased to 1.45 on Keto/Carnivore, compared to my baseline in the 0.17-0.39 range. I think it’s interesting how my hsCRP perfectly matches how unwell I felt without carbs. 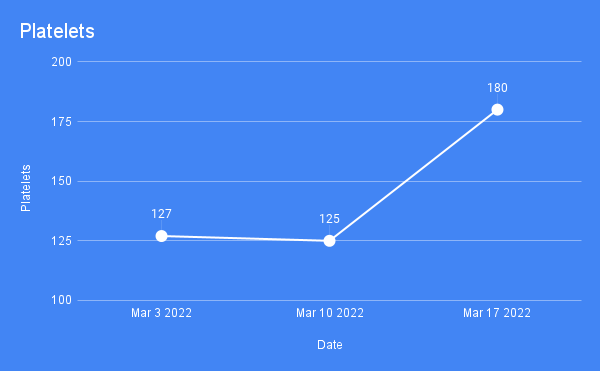 Platelets – Arguably the most unusual result. Platelets were below ref range (common for me) in Week 1 – Vegan and Week 2 – Keto. Only Week 3 – Keto showed normal platelets. 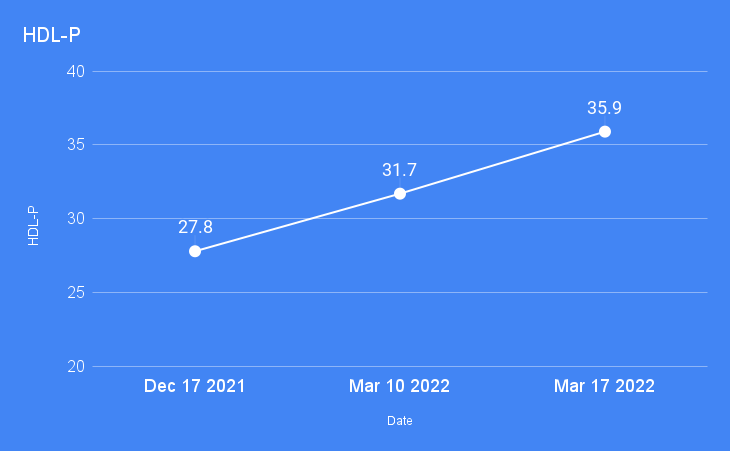 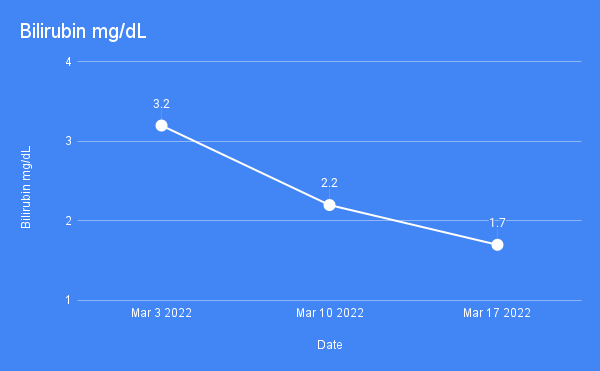 Bilirubin – Decreased linearly with the duration of the keto diet.  Bilirubin went from my normal of 3.2 down to 1.7 by Week 3 – Keto, which is the lowest I’ve ever seen it. 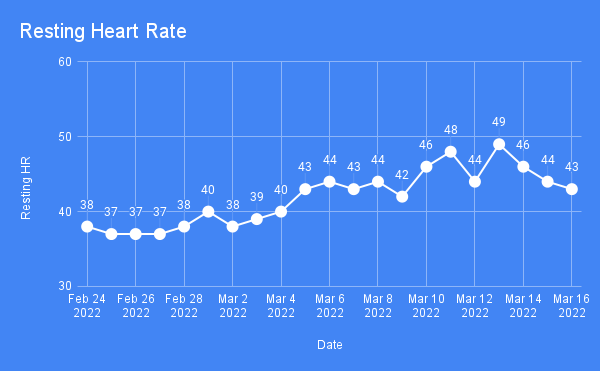 Resting HR – The Keto/Carnivore diet resulted in a higher resting HR.  At first I thought it was because I went from 50 to 70 miles in one week, but my HR was at its highest after reducing my mileage down to 50 in the final week of the experiment, so this is clearly an effect from diet and not training load. 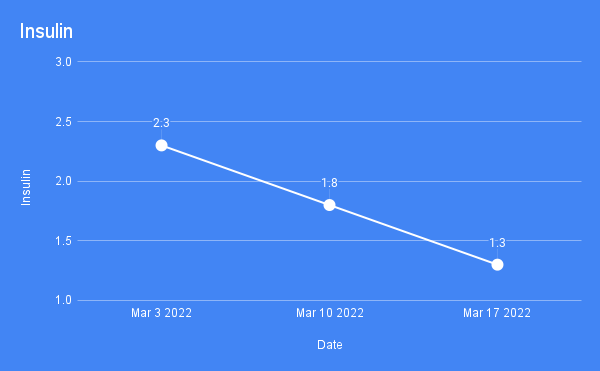 Insulin – This behaved as expected.  Insulin was already low on a carb-based diet, and went even lower on a Keto diet. 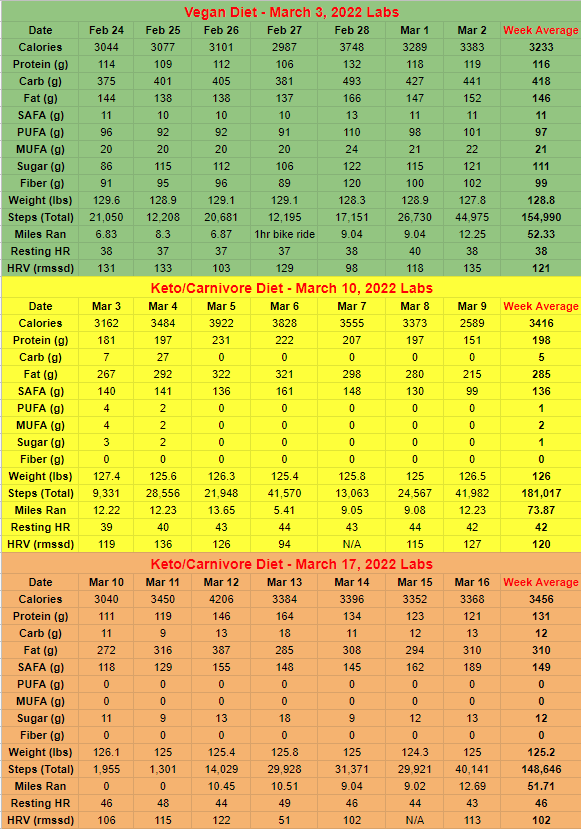 Note from Nick: I want to begin my concluding remark by repeating two quotes from Mark: (i) “I find lipids and biomarkers pretty fascinating,” and (ii) “If LDL/apoB is the only risk factor, what is the risk for someone like me?” These quotes represent questions I and other LMHR ask themselves every day. Notably, the fact that Mark’s personal hypothesis leans towards isolated high LDL-C being sufficient to drive atherosclerosis (and, thus, less in line so with some in the LMHR community) does not preclude him from sharing a genuinely scientific interest in the LMHR phenomenon, nor should it. This n=1 experience is a testament to how those with different hypotheses can share scientific curiosity and collaborate in genuine attempts at pursuing scientific truth. For more thoughts, read my commentary here. 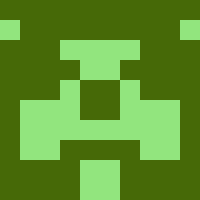 Great experiment Mark!! You finally experimented on the Keto diet, more on the carnivore side btw. I’m sure you would make your LDL even higher overtime, even if you eventually add vegetables and fruits (like me).
Interesting to see your hsCRP increase on this diet, and even more interesting your increase in HDL-p which makes me think mine could have been even lower before going Keto? Who knows. Love your passion for experimenting. Thanks for sharing!

Good job Mark! Thanks for taking one for the team! I really like that you picked the worst example of both the vegan and the keto diet. They are both caricatures of the extremes, which I think makes the test more interesting because it’s side steps any conversation about one diet being more ideal than the other and therefore skewing the results one way or another. Because I think both carnivores and vegans would agree they’re both pretty awful diets

wpDiscuz
2
0
Would love your thoughts, please comment.x
()
x
| Reply
You are going to send email to
Move Comment